I have always loved sprinkles.. you know what I am talking about! Those colourful crunchy little, sweet, perfectly straight, all the same size ice cream sprinkles? All my life I have only eaten them on ice cream. I ALWAYS get sprinkles on any ice-cream I buy & even at home….sprinkle sprinkle. But lately, to my immense pleasure, sprinkles have been popping up all over the place! On cookies! In cakes!!!  On Cakes!! & I saw that they were even in the icing of an Oreo cookie!I love it! So this Sprinkle Birthday cake was exactly what I wanted to make & eat!

I made this 3 layer white cake with sprinkles for a family birthday party for my sister’s birthday! All of her kids & grand-kids were here & this cake was a hit! The recipe has lots of ingredients & the egg whites have to whipped, but it was worth!! There are plenty of cakes that are quicker to make, but if you want a WOW! THIS CAKE IS BEAUTIFUL! try this one! It is a very special & memorable 3 layer white birthday cake.

The recipe is from Martha Stewart.com Sprinkle Cake

Prepare 3  8 inch cake pans. I sprayed them with non-stick spray, but you can butter them with some extra butter not from the amount needed for the cake. Then line the bottom of each cake pan with a parchment paper round, then spray or butter the parchment paper. Then dust each cake pan with flour, put some flour in & tap it around the pan to evenly coat all sides with flour *** I do this over my garbage can so the excess flout falls into the garbage,,,Tap out the excess flour

While the cakes are cooling, make the buttercream icing

Now, when the cakes are completely cool, trim off the top of 2 of the layers., using a serrated knife, to make a flat surface….( better eat the cut off bit to make sure it tastes ok!)

Put one layer on the serving dish that you want to use. *** tip.. cut strips of parchment paper about 3 inches wide…(or even wider actually, then it will catch all of the sprinkles that fall… so make the strips as wide as you need to completely cover your serving dish.. when you pull them out after finishing the cake…your serving dish should be clean!)  maybe 4 strips..and place under the edges of the bottom of the cake having some of the paper under the cake & some of the paper outside ot the cake

Put some icing on the top of the first layer, the recipe for the icing I used makes 4 1/2 cups of icing…the recipe that is used on the Martha Stewart website makes about 6 cups of icing, so you have to make sure you you have enough icing to ice the top & sides of the cake…so I did not use too much icing in either the middle or top & sides. Because the top & sides of this cake have sprinkles on it, there doesn’t have to be tons of icing but enough to cover the cake…  I did not meaure the amount of icing I used inbetween the layers of the cake..I made it before I started this blog… but just watch your quantities.. if you have to make more icing it will be ok as long as you have the ingredients…

Put the second cake layer on top of the first one & put the same amount of icing on it that you used on the bottom layer. Next but the third cake layer on. I trimmed the top cake layer but you do not have to…whatever your preference is fine…whether you like the top of your cake to be flat or rounded

Frost the top & sides of the cake

The next part is very messy…so to save your counter, the recipe suggests that you put the serving platter ( they are using an icing turntable…) on a baking sheet that has been lined with parchement paper to catch the falling sprinkles! Toss sprinkles at your cake on the top & sides. I pressed them into the icing…  The recipe says to chill the cake for about 5 minutes to set it before serving.. 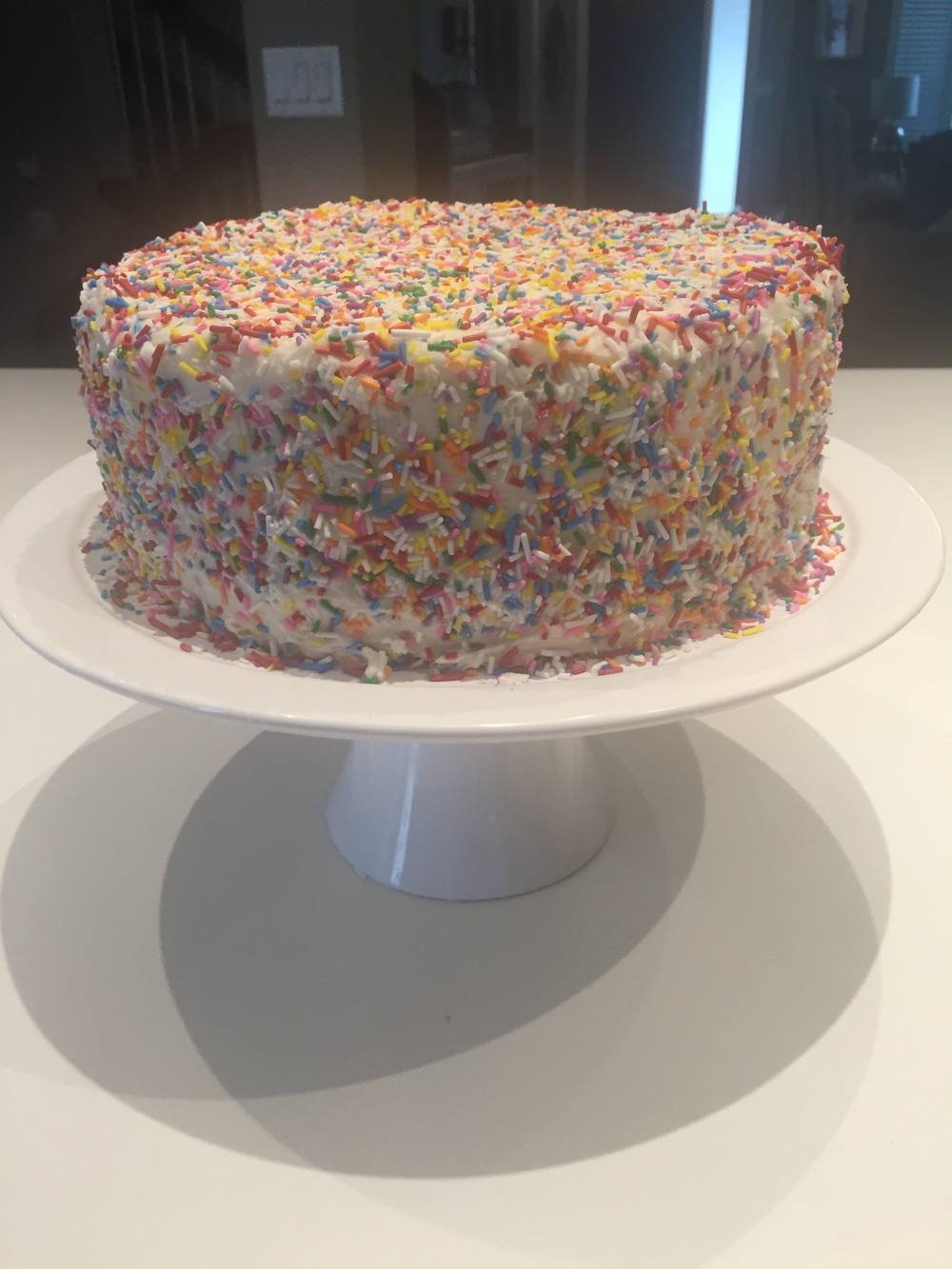